Weston-super-Mare is a seaside town in North Somerset, on the Bristol Channel, 18 miles south west of Bristol. It includes many smaller suburbs and its population at the 2011 census was 76,143. Since 1983, Weston has been twinned with Hildesheim, Germany. Although there is evidence in the local area of occupation since the Iron Age, it was still a small village until the 19th century when it became a seaside resort and was connected with local towns and cities by a railway. Two piers were also built. The growth continued well into the second half of the 20th century and today's modern attractions include the Helicopter Museum, Weston-super-Mare Museum, the Grand Pier and an aquarium. Cultural venues include The Playhouse and Blakehay Theatre and the main shopping centre has a large array of shops and other amenities.

Popular with commuters, for those travelling further afield Weston-super-Mare offers easy road connections to all major local centres in the area including the City of Bristol some 22 miles away. In addition, junctions 21 and 22 of the M5 are both close by and the main line railway station in the centre of Weston offers local and intercity services with direct trains to Bristol, Bath and London Paddington.

In September 2014, the North Somerset Enterprise and Technology College (NSETC) opened. From September 2015 it has provided education to 14- to 19-year-olds and specialises in the STEM fields; science, technology, engineering and maths.

The town contains several arts venues. The Playhouse serves both tourists and the local population. The Winter Gardens on the seafront hosts shows, exhibitions and conferences. The Blakehay Theatre & Community Arts Centreis a small venue housed in a former Baptist church. All Saints Church hosts regular concerts, some of high national standing. This church is also used for recording, especially by the Emerald Ensemble and has featured on BBC TV programme Songs of Praise.

The Odeon Cinema was opened in 1935 and is a building in the modernist style designed by Thomas Cecil Howitt. It houses the only Compton theatre pipe organ in an Odeon cinema outside London and is one of only two working theatre organs left in the country still performing in their original location in commercially operating cinemas. This Compton organ was installed in 1935 and is the only one left in the West Country, the next nearest being the Odeon Leicester Square, London. All other models have been either restored and moved elsewhere, or destroyed.[101] Occasional organ concerts continue to be held at the venue. The building has Grade II Listed status.

An illuminated cart passes the Winter Gardens during the annual carnival

Weston-super-Mare has a small number of live music venues of note. "Scally's" hosts more established touring rock bands, while the "Back Bar", "The London", and "The Imperial" hold regular open mic nights which attract a wide array of local musicians, as well as artists from further afield. The T4 on the Beach concert had been hosted annually since 2006, up until 2012, by Channel 4 youth programme T4. Well known bands and singers perform four or fewer of their hits. However, the vocals are mimed as the event is being produced for live TV broadcast.  Each summer the beach is also used as the venue for the Weston-super-Mare Sand Sculpture Festival.

The town was the subject of a song "Sunny Weston-super-Mare" performed by local band The Wurzels.The last scenes of The Remains of the Day, a James Ivory film of 1993, were shot at locations in the town including the Grand Pier and the Winter Gardens.

The Weston Arts Festival takes place each year during September and October using local venues including the Blakehay Theatre, Playhouse, All Saints, and galleries and offering a wide range of cultural events.

Weston is also the final event on the November West Country Carnival circuit, when a large number of brightly illuminated floats parade through the streets.[112] 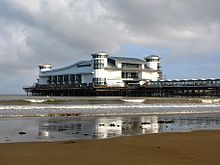 The Grand Pier is one of the most popular tourist attractions in the town. It previously housed funfair style attractions, a go-kart track, cafes, a fudge factory, and a host of arcade games, and underwent a £34 million re-development after a fire in 2008 destroyed the main pavilion. After a harsh winter which delayed progress, the new pier pavilion reopened on 23 October 2010.

Weston's first pier, Birnbeck Pier, standing on a small island to the north of the bay is currently closed to the public. The current owners, Manchester-based company Urban Splash purchased the pier in 2006. A competition was held as a means to encourage redevelopment of the site for commercial use. To date, no firm plans are in place, and the future of Birnbeck Pier is uncertain. The pier houses Weston-super-Mare Lifeboat Station.

The Knightstone complex in 2010

Knightstone Island housed a theatre, swimming pool and sauna, after having been purchased by the physician Edward Long Fox in 1830 to create a therapeutic spa with range of hot, cold and chemical baths. After years of disrepair and dereliction, the area has been redeveloped by Redrow Homes. During 2006/2007, luxury apartments and commercial outlets have been built on the site. Consideration has been taken due to the listed building status of much of the site. Boat trips from here include the Waverley and Balmoral and trips to Steep Holm and Flat Holm islands as well as short trips around Weston Bay.

The Tropicana outdoor swimming pool that is located on the southern section of the sea front has not been occupied since 2000. A private developer, Henry Boot, was selected to redevelop the site with a new Life Station leisure complex, which was planned to include a six lane, 25-metre (27 yd) swimming pool, water park, 96-bed hotel, restaurant, eight-screen cinema, 14 retail units, and a 20-lane bowling alley. The redevelopment was beset by delays and controversy.  A group of local residents challenged the council over its decision to appoint Henry Boot, asking to put forward their own proposals for the site.[128] In November 2009, the plans were finally abandoned, leaving the future of the site uncertain. In 2010 the council invited submissions from developers for a new, less ambitious, scheme to redevelop the site with a swimming pool at its heart. A decision on a new scheme was expected towards the end of 2010. The local authority announced on 23 August 2011 that it was giving developers six months to propose plans for a smaller development otherwise they will arrange to demolish the Tropicana. In February 2013, North Somerset Council granted planning permission to a consortium of local businesses who intend to build a new swimming pool complex on the site.
The First World War memorial in Grove Park, containing a sculpture by Alfred Drury, was unveiled in 1922, with additions by Walter Cave for the Second World War. It contains the names of 402 men from the area who fell in the First World War. It consists of a winged allegorical figure of Victory holding an olive branch, which stands on an octagonal column. The memorial is a grade II listed building.

If you are thinking of moving, why not request a free no-obligation market valuation of your property?

Book a FREE Valuation via our Calendar